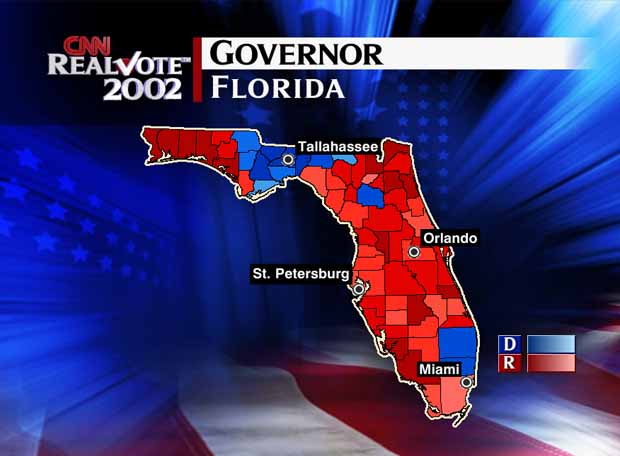 Florida Revisited: An account of the US midterm elections

Executive Summary
America held mid-term elections on 5th November, 2002. A third of the Senate and the whole House of Representatives were up for re-election as were 36 state governorships. At the same time, many states held referendums on a raft of local issues as well as elections for school boards.

The elections attracted much attention – both in the US and worldwide. For example, it was the first US election to be observed by a team of monitors from the OSCE/ODIHR, presumably because it presented the first opportunity to scrutinize the US system since the much-derided presidential election of 2000. The elections were also widely viewed as a referendum on President Bush’s ‘war against terror’ as well as providing the administration in Washington with a possible mandate for a future war with Iraq. Attention was carefully deflected from domestic issues, despite deepening gloom over the economy and rising unemployment .

After the poll, the US media and government officials indulged in much self-congratulation as a repeat of the November 2000 presidential election fiasco seemed to have been avoided. However, in the pre-election period there had been a raft of complaints concerning irregularities in areas such as voter registration, negative campaigning and the total imbalance between the parties in election expenditure. The most serious (and tragic) event leading up to the poll occurred on 25th October when Senator Paul Wellstone (Minnesota) and his wife were killed in a mysterious plane crash as their small aircraft was coming in to land at Eveleth airport. Wellstone was facing a tight race against Republican challenger, Norm Coleman, and conspiracy theorists have suggested that his courageous stance – Wellstone was up for re-election and had voted against war with Iraq – may have led to his untimely death.

George Bush’s Republican Party won control of both the Senate and the House of Representatives and Washington can now be expected to reassert its authority as the global arbiter of electoral freedom and fairness. Yet the introduction of new state-of-the-art voting systems in the November poll raises uncomfortable questions. Blind faith in what had become out-dated punch-card technology had done much to discredit the elections in 2000. Would today’s new technology overcome the practical problems experienced then as well as remove the possibility of politically-motivated interference with the polls? To what extent does the new technology actually strengthen the integrity of the Western-style democratic process? Will an already sloppy electoral system fall prey to anti-democratic forces? Has it already?

BHHRG went to Miami-Dade County in southern Florida for the November 5th, 2002, election. Miami-Dade County, along with neighboring Palm Beach and Broward Counties, witnessed some of the most serious alleged irregularities in the 2000 presidential election. This report attempts to address issues about the 2002 election that major press and media have thus far chosen not to highlight, and poses questions about the implications of the 2002 election for democracy and the rule of law in the United States.