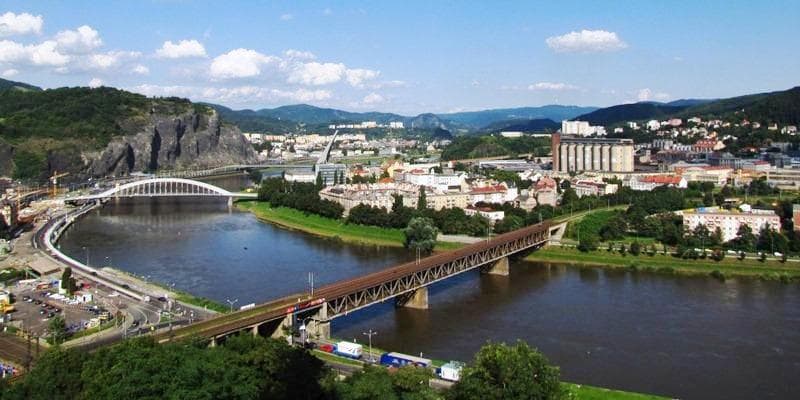 GYPSIES IN THE CZECH REPUBLIC, The Controversy about Usti nad Labem

In the spring of 1998 the international media reported alarming stories about the treatment of gypsies in two Czech towns, Usti nad Labem and Plzen. According to their critics, the mayors of both towns were threatening to create ‘concentration camps’ by ghettoising their local gypsy communities – in Usti nad Labem behind a high wall and in Plzen by surrounding a gypsy-inhabited block of flats with barbed wire. News reports about these alleged plans appeared in media as diverse as The New York Times and the BBC at the same time as hundreds of Czech and Slovak gypsies had begun to arrive in countries like or Britain or as far away as Canada. A year earlier, on 6th August 1997 the Czech Republic’s independent TV station Nova screened a programme With Their Own Eyes showing Czech gypsies being given a warm welcome in Canada where they had sought asylum from racist attacks. Many had responded to this programme by purchasing airline tickets to Canada where they were received less than enthusiastically by the authorities. By October 1997 the Canadians had imposed visa requirements on all Czechs to stem the flow of unwanted gypsy asylum seekers. Early in 1998, large groups of Slovak gypsies (as well as others from the Czech Republic) began to descend on the British port of Dover after another TV programme (this time on independent Slovak TV station Markiza) gave an exaggerated account of the generosity of the British welfare state. In reaction to the exodus, the authorities in the West spoke with forked tongues. Although it is clear that governments in Britain and other Western countries are hostile to a large influx of gypsies (or any other group of immigrants, for that matter) into their territories, they have failed to support claims by the Czechs that there is no systematic persecution of gypsies in the Czech republic. Indeed the European Union has also seemed to endorse the charges in its assessment of the Czech Republic as a candidate for membership. The situation is further complicated by the fact that the Czech president, Vaclav Havel, whose name is a byword for tolerance and respect for human rights has echoed the views of those who charge that the Czechs are inherently racist. Several of the President’s statements imply that the gypsy population in his country is, indeed, persecuted by representatives of the state like the police.

No-one can seriously deny that gypsies in the Czech Republic frequently face serious problems in their lives. However, whether these problems are primarily the result of racism directed at them by (parts of) the majority population or result from other less emotive if no less real grounds needs to be investigated.

Certainly, the British Helsinki Human Rights Group’s monitors have repeatedly found that gypsies emphasise socio-economic problems like unemployment rather than racism whereas NGOs and journalists tend to place racism at the top of the list.

Across the former Communist bloc there has been considerable upheaval since 1989 which has affected the economy and the world of work profoundly. Old labour intensive industries and the obligation on all to work and the state to provide at least the simulacrum of it have past.

Gypsies have been badly hit by unemployment since 1989. The economic downturn in recent months has exacerbated the plight of all low-skilled groups. The question seems to be whether the problems that face the hundreds of thousands of gypsies in the Czech Republic (and elsewhere in Eastern Europe) are specifically the product of a society and economy dominated by institutionalised racism or are merely extreme examples of the difficulties confronting so many people in these transition economies.

Also, with the end of Communism, jobs for life disappeared as economic restructuring took place and even though the Czech Republic undertook economic reform far less rigorously than people in the West imagined, many low-paid low-skilled jobs disappeared. The gypsies were the first to suffer from these changes as they tended to be unskilled. Exact statistics for an ethnic breakdown of unemployment in the Czech Republic are not available as the post-Communist governments rejected the previous regime’s use of national identity to categorise Czech citizens. (A unclear number of Slovak citizens who are gypsies resided in the Czech Republic after the separation of the two parts of Czechoslovakia in 1993. There may be about 100,000 out of an estimated 300,000 + gypsies in the Czech Republic.)

The family history of many Czech gypsies meant that frequently they were relatively recent arrivals in the country from further east in former Czechoslovakia or even other ex-Habsburg territories like Transylvania. Even today it is common to meet families with three or more different generations whose mother tongue varies from a grandmother speaking Hungarian, via a parent with Slovak as the first language to children attending a Czech-speaking school.

Such linguistic complications compounded the low esteem with which many gypsies had traditionally viewed formal education. A migratory lifestyle (at least until enforced settlement under Communism) was hardly conducive to regular schooling. Poverty and gypsy traditions discouraged children from remaining long in school even when settled. There is some evidence that since 1989 with greater freedom of movement patterns of disrupted schooling among gypsy children have tended to reappear, though not for the majority of such children.

In the absence of statistics, it is impossible to give an accurate picture of unemployment among gypsies, but certainly they are very much more likely to be unemployed than other Czechs _ many media sources repeat a figure as high as 75%.

Prejudices against the transient gypsies and folk-tales of their unreliability have undoubtedly also helped to discourage their employment since 1989. However, it is issues like punctuality and reliability on the job as well as a tendency to move suddenly from place to place since 1989 rather than a crude perception of gypsies as petty criminals among Czech employers which has tended to reduce their chances of employment in the post-Communist private sector.

For all that it tried to halt their traditional migratory way of life and impose its standard strait-jacket upon them, the Communist system also offered the gypsies like other poor people accommodation in cheap, state-owned properties albeit of limited quality. Now with many buildings being privatized, they are frequently moved on by owners without much realistic prospect of finding adequate alternative housing. The frequent inability to pay commercial rents has meant that many gypsies migrate from one block of flats to others less salubrious but yet to be privatized.